Last year, someone came up to me and asked: Do Bahraini’s buy stuff online?

“Of course they do!”, I said, without a moments hesitation. “Just look at ..”

After giving it a bit more thought, I realized there were a couple. When I quickly checked their sites out on my phone, they were both down (Tejaraty is dead, and so is eFood).

Damn. We’re in the 21st century and there’s not a single purely online business in Bahrain? I then thought: was it not Gandhi himself who said: be the change you wish to see? In a moment of raw inspiration – I felt a strange force penetrate my entire being as I came to the vivid realization: I’m a web developer. Why don’t I just make one.

Seriously, how hard can it be?

As serendipity (boy do I love big words!) would have it, I found myself in an iPhonography workshop held by the incredibly talented Rasha Yousif, at the Incubator in Hidd. I exchanged a few words with her during break, where she told me about a service in the US that she used to print her photos on canvas – even Instagram shots. It seemed interesting, particularly becausethere didn’t seem to be any competitors regionally in the same space. I took down some notes, and when I got back that day – I did a quick search and my suspicions were confirmed. There wasn’t a competitor in sight.. and this was at a time whenphotography (particularly Instagram) was booming like crazy here.

I then did a bit more searching to figure out how much it would cost to build the thing from scratch – so I could actually get the art done myself. So I grabbed a napkin, and with my trusty laptop in one hand, and the pen in another, I got to work. This was the result: 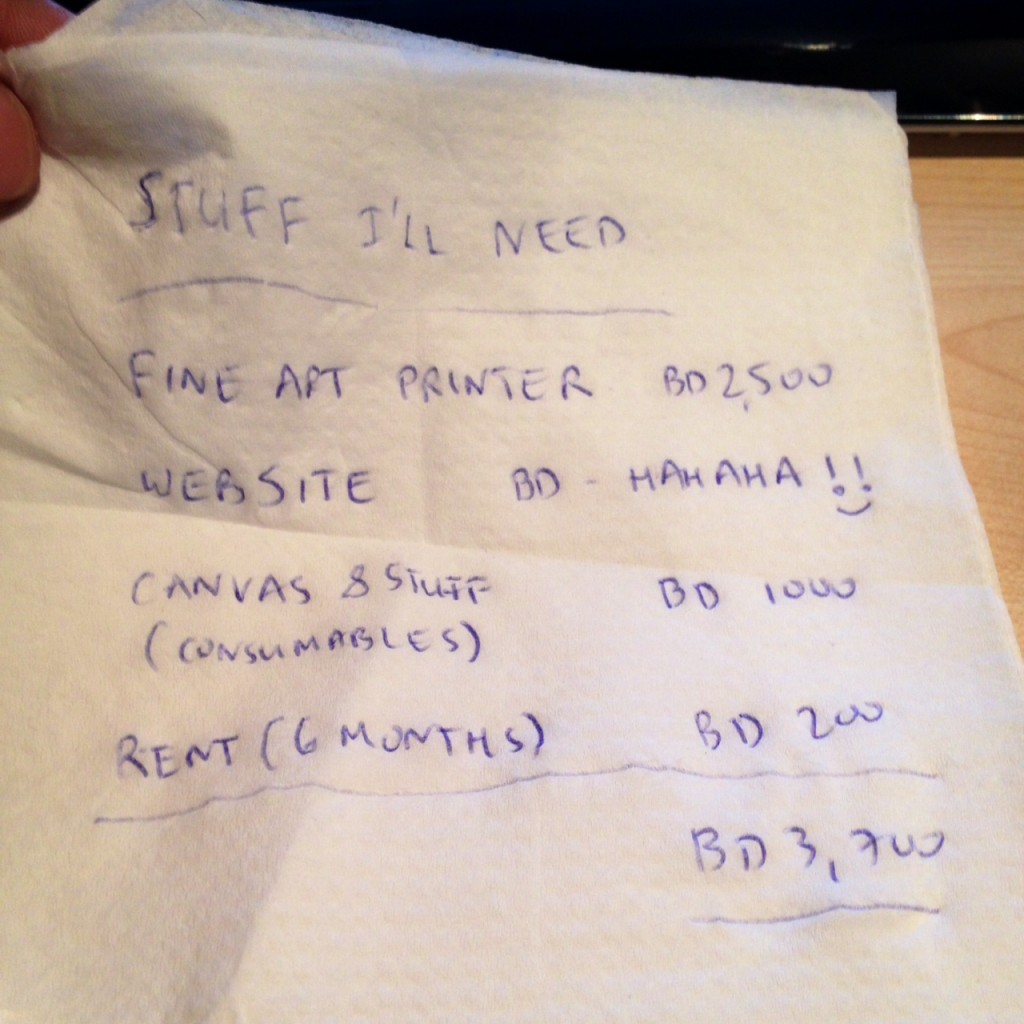 Part 1/2 of the business plan – what’s this thing going to cost?

Yup, that looks like a winner. I later realized that Bahrain subsidizes equipment purchases for small businesses (through a program called Tamkeen) by 80%! That brought the startup costs down to just BD1,700 (or about $4,500). Also, the rent is insanely cheap because I quoted the subsidized rate that’s offered at the BBIC (more info on that here).

The second part was figuring out how much it would cost to make each canvas art piece, and how many I’d need to sell to get that initial investment of BD1,700 back.

Now, I had originally planned to use the flip side of the above napkin, but a sneeze caught me off-guard and let’s just say that I wasn’t able to use the other side anymore ..

So I flipped Excel open, and typed the below: 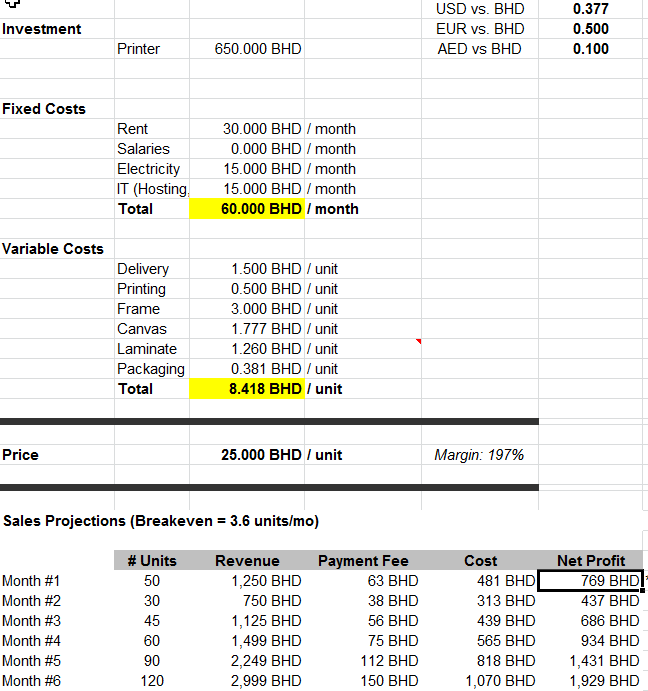 _Note: _Of course, I later realized that I had underestimated the costs (and that I had to actually hire someone to do the work), so the breakeven was higher. We founders can’t help being optimistic with the numbers :)

I took one look at the numbers and thought, wow this is great! Just one thing remained to be sorted: What would the company be called? You can probably guess I didn’t lose much sleep on the matter – it was just an experiment after all.

So, how DO you start this company thing anyways?

The idea appealed to me for many reasons, particularly because of it’s simplicity (at least, that’s what I thought at first). It’s just an art company for God’s sake, how hard could it be. But then, it was time to start. There were a TON of things that needed doing, and I’ve written about them at the end of this piece (if you’re interested in the gory details, just click here).

Anyway, it looked like it would take about a month to get things in order (order the materials, buy the printers, get the space sorted and finish that website up). It actually took 2 months – and it could easily have taken 6 months, primarily due to the very long wait times on the government subsidy process. Instead of waiting, I managed to strike a deal with Canon – the printer supplier – and I told them that I’d pay them whether I got the government grant or not. That meant I didn’t have to wait for the approval – which ended up taking like 3 months in total (and I’m told I was lucky – it’s taken longer).

In about 2 months, I was able to get a very crude version of the site up (it looked like crap, but it was functional – most of the time). Anyway, in the month leading up to the launch date, I created a Twitter and Instagram account for canvasbh. I managed to get a decent following (about ~150 people) over the course of the month, many of which I grandfathered in from the printbh account (I might write a post on that startup at some point in my lifetime).

I picked April 30th because it was a good stretch target (i.e. it was doable, but I’d have to hustle like mad to make it!), and the day after it was a public holiday in Bahrain – Labor day – so the likelihood of people staying up was higher than normal (which is good – since launch time was at midnight). Why midnight? I dunno – it was a good round number, I guess.

I did some last-minute tweaks to the site, and it looked like things were all set. The plan was to stay up all night, in case any issues popped up – or if anyone had any questions to ask.

The problem is, I hadn’t been getting much sleep in the days leading up to the launch – see, once you make an announcement, there’s no turning back. I’d spent the majority of the time leading up to the launch trying to sorting out suppliers issues, and figuring out the process (you know, how to actually make the art), that I didn’t really have much time to spend developing the website itself. So I just cut back on sleep to make up for it.

Here I was – the clock had just struck 11PM – and we were just one hour away from the launch. I was feeling abit tired. Just abit. So I thought I’d just take a quick nap, so I’ve got a bit of energy back by the time it was midnight.

Long story short, I slept right through the night. I didn’t wake up until the next morning, and when I checked the (online) cash register .. here’s what I saw: 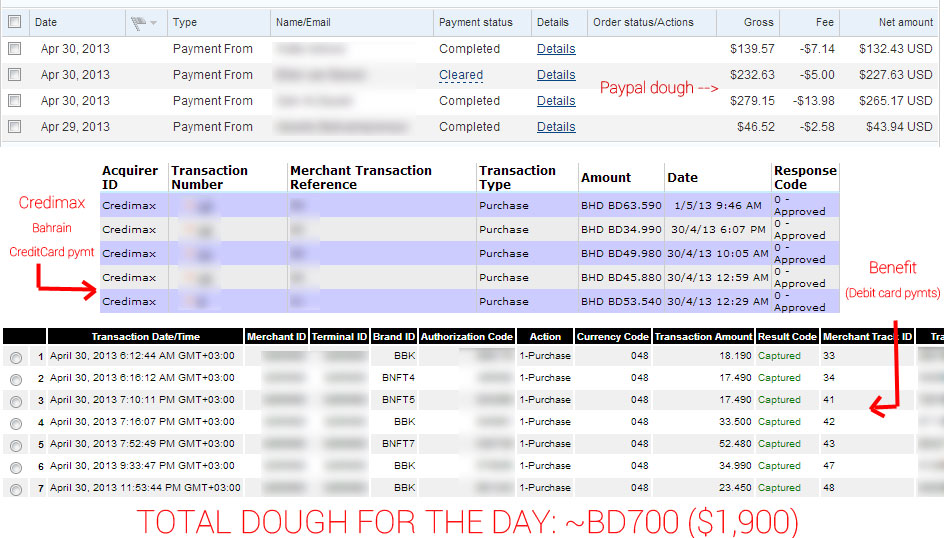 OK, so you made some money. But was it really a success?

Good question, keeping your eye on the money – I like that.

Let’s look at the numbers from the start (I started April 30th, so let’s just call it May). We’ll compare the estimates I made in Excel up there to the Actual Earnings, OK? OK. 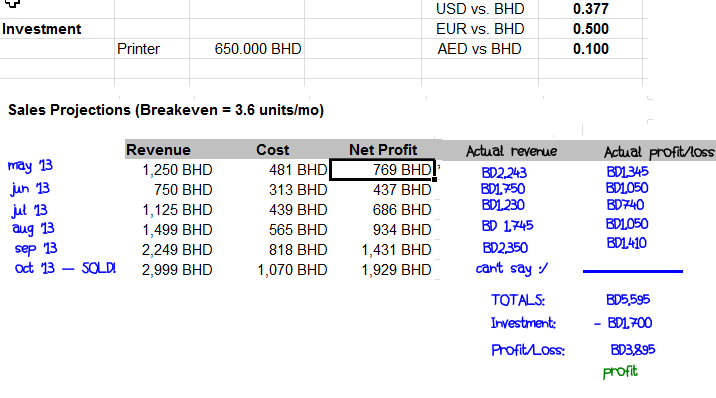 As you can see by the end of that first month, I had sold BD2,243 worth of art – and this was just in Bahrain. The growth wasn’t as crazy as I imagined it would be, since the original plan was to expand outside Bahrain – into the rest of the GCC, but that never happened..

When I got back from a trip to the US in October, I decided to sell the company – the experiment had lasted long enough to give me a satisfactory answer – and it’s in good hands now. (No, unfortunately I can’t disclose how much it was sold for – but I’m pretty happy :) )

So do people in Bahrain really buy online?

I made it a point from Day 1 of this experiment – no offline money business. There was 1 or 2 cases where I made exceptions – mainly due to technical glitches in the payment process – but I can say with 100% certainty that at least 95% of the money we made was processed on the site and was done using online payment methods.

P.S.: I also learnt something very important about the Bahraini market in this experiment. **Word of mouth rules! **At some point, 3 of every 4 customers had heard about Canvas.bh through a previous customer that recommended the service. The good news is: if you’ve got a good product, and that product stays good, you have a chance at really growing!

Appendices (aka the other stuff);

1/ Things that I had to do before starting Canvas.bh