I’d heard alot about Soylent as a form of food that doesn’t require any cooking: just add water, and hey presto! It’s all nutritionally balanced, cheap(er than junk food) and filling. I don’t spend much time eating (typically about 90 minutes a day) and generally enjoy it (probably because my wife does most of the cooking). Still, this is something I’d like to try — just to get a feel for how it feels to eat a balance diet (I generally over-eat).

Since I’ll be consuming less than the 2,000 calorie recommended daily intake, I do expect to lose weight during this period. Here’s a look at what my key metrics look like before the trial (I’m using this scale):

I noticed that my BMI (Body Mass Index) is just at the edge of the normal range (anything > 25 is considered “over-weight”). This intervention came at the right time — let’s hope it works out!

I also went ahead and ordered 4 bags of the good stuff: 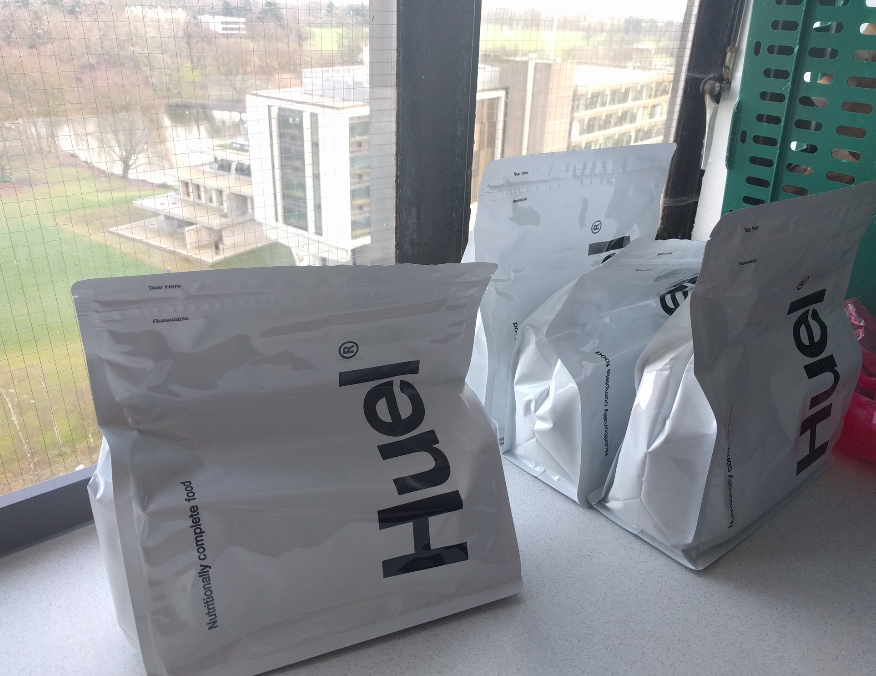 This wasn’t easy — and I must admit that I did change things a bit after I started, in the interest of maintaining this experiment. For one, I started having a normal breakfast (cereal) instead of Huel because it just felt like it was too much to have it for all 3 meals a day. Also, one a week I would have a lunch out with my wife.

Other than those exceptions, I stuck to the plan. While Huel doesn’t taste bad, it doesn’t come close to tasting as good as regular food. Also, it made me gassy — especially in the beginning.

Let’s take a look at the numbers:

So, I lost 0.7 kg during the two weeks and the Fat % of my total body weight went down almost half a percent. Looks pretty good to me!

A stricter compliance with the Huel meal schedule (3 times a day, every day) would probably have given more extreme results (definitely lower body weight, probably around 2 - 3kg difference) and lower Fat % (since it has a lower amount of fat than the food I usually consume).

Overall, good experiment — and going forward I’ll be continuing to have Huel for one meal a day. Will update this post at a later point with longer-term feedback.