The first idea I’ll be testing is one that I’ve had for a while. The description I had from the Ideas list is this:

The way that large companies propagate high-level goals down from leadership to employees across the company is broken. It ends up becoming a formality, done over Powerpoint slides twice a year (beginning and end, during performance reviews). This is a lost opportunity, one where goals could serve as the glue that ties employees daily work towards a greater company objective. Coupled with transparency, employees can see exactly how they impact the greater goals.

Since this is the first idea I’ll be validating, I’d like to try out the most obvious method — the infamous Business Model Canvas. So I fill it in like so: 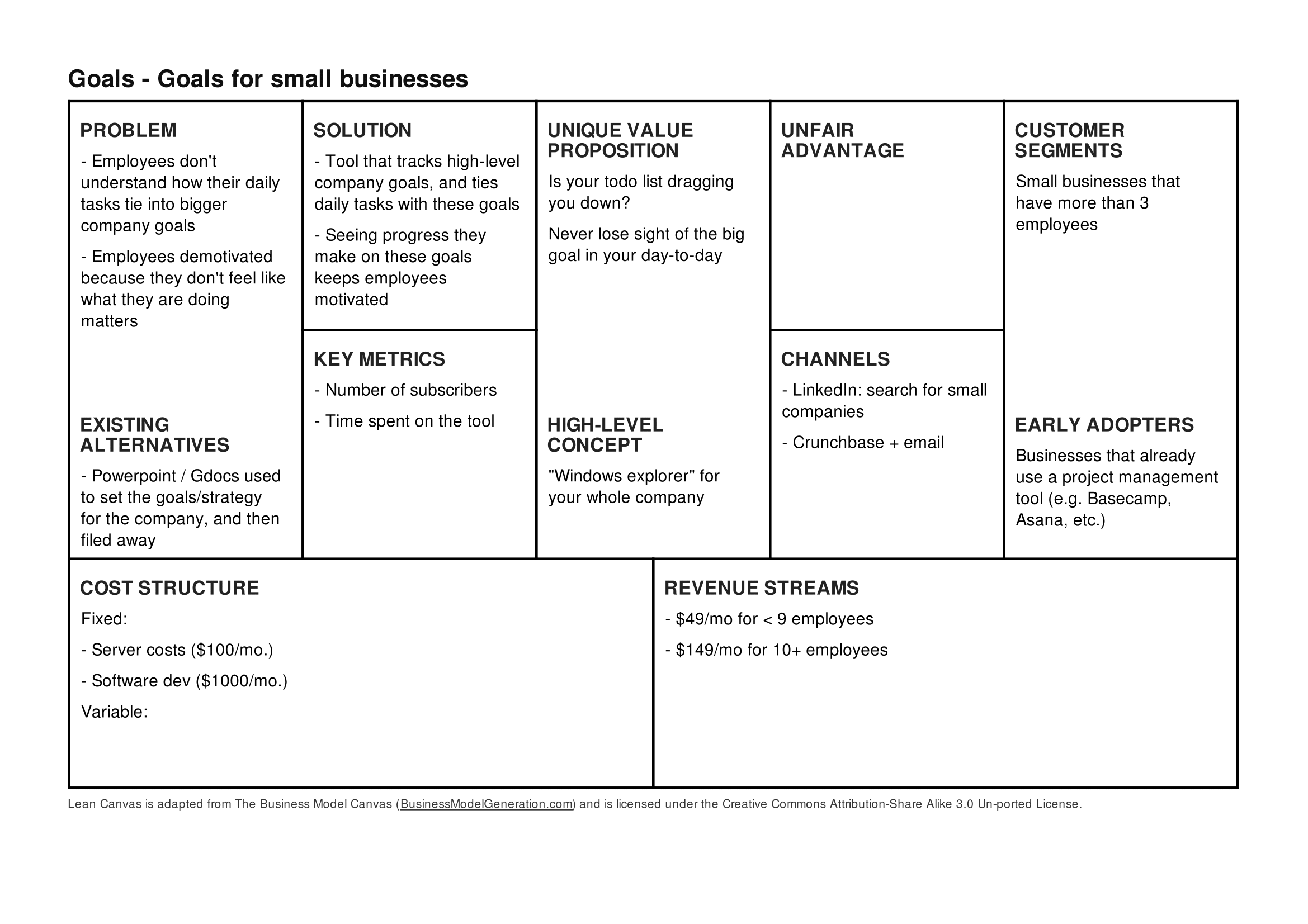 I spent about 30 minutes filling that in (I used LeanStack to get it done). Ok, the idea was pretty vague when I started — and now it does seem abit more concrete.

The next step would be to “validate my riskiest assumption”. I’ll list down all of the assumptions I have going on (aside from the canvas, in it’s entirety):

The challenge I’m sensing in this goal is a greater one — one that relates to product adoption. How the heck am I going to convince a large corporation (one with 1k+ employees) to pay for a tool that doesn’t yet exist — and for a problem that they may not even be aware they have.

So that’s our concern then: do customers know they have a problem?

Since I have no intention of building the product without paying customers lined up, I’m necessarily going to have to start with smaller companies (<100 employees).

In order to test out this assumption, I decided to run some interviews. For this, I primarily relied on Justin Wilcox’s proven interviewing tips.

My process was simple:

To reach out to the founders, I used MatterMark’s dashboard search. It’s awesome because it lets you search companies by number of employees. I then wrote emails out to the Founder/CEO’s of the first 50 companies on the list. The email address is often [email protected] 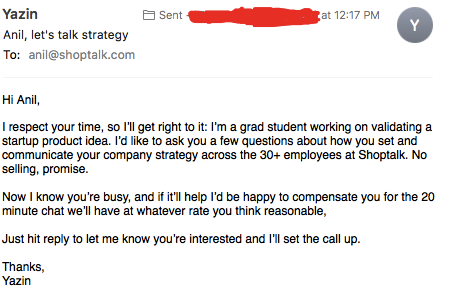 I expected to hear back from half of the folks — so about 25 (especially since I offered to compensate them for their time, something I learned from Jason Cohen).

I also drafted a few questions that I’d ask in the interview. Here are some of them:

This was more to guide the discussion — I expected to be asking alot if “why” questions too, to understand what was going on underneath the surface. I did not plan to do any selling on this call — that would happen later, once we’ve validated that customers are aware of this problem.

I had 0 positive responses within 3 days of sending the email out. 5 people replied to kindly say no, they were not interested.

It’s reasonable to assume that if they really did have a hard time communicating the company strategy throughout the organization, they would’ve replied (barring some sort of email deliverability issue, which I knew was not the case).

I went back to my business model canvas, and thought about my definition of early adopter. It was, of course, super-general. Maybe there was some way to narrow it down to a smaller group that face a more severe variant of this problem.

The ideal group of early adopters:

The folks I’m reaching out to meet none of these criteria (which may be why the acceptance rate is so dismal). Seems like I’ll need to be much more specific about what folks I’m looking for here.

I want to help entrepreneurs solve their strategy communication problem

I can’t seem to be able to define the problem, and therefore I can’t even begin to fix it. I’ve tried searching for externally observable behaviors that suggest that this problem exists (e.g. “i don’t know what to work on! too many tasks on __”) on Twitter but couldn’t find anything. I also tried searching for blog posts, etc. and also came up short. So while this problem may seem like it might exist somewhere, I have no conceivable way of detecting (let alone reaching) those that have it.

Hence, there’s nothing more to do here.

Experiment failed, because I was unable to find people that face the purported problem this idea solves.