The GForms’s Landing page took me about 10 days to build, launch and validate — most of it spent on the damn front-end making sure everything looked OK on mobile and desktop. Once I ran the experiment, within 24 hours I knew it was not going to fly. The question is, could I have finished it sooner?

This idea is to make a simple tool that helps you validate an idea quickly. No more slogging through creating a landing page, hooking up Intercom, etc. A/B testing messaging and running experiments. This tool has all the best practices built-in, and makes the process smooth as silk. $99/month, and you’ll still save so much time and money!

That’s the idea anyway. Let’s see if it picks up any steam.

Step one, as ever, is to validate your riskiest assumption. Let’s break out the busines model canvas. 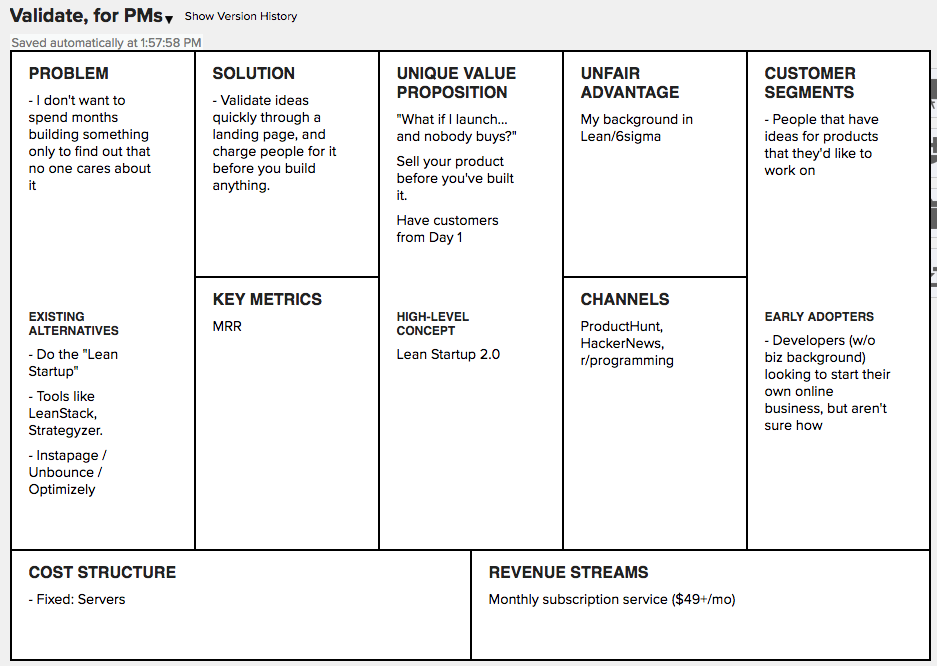 Ok, with that out of the way it’s clear that I’m going to need a landing page to test things out. I decided to build it using a landing page builder (as opposed to hand-coding it, which took forever last time). I settled on InstaPage, and was able to get familiar with it pretty quickly.

It was all super-quick, and took just a few hours to put together.

Here’s the end result (Yeah, I know … super-long, and text-heavy):

You’ll notice a Login link there (that’s fake, and leads to an empty page with a fake login screen that does nothing) and an address (also fake).

Again, we need to make sure we’ve got clear goals ahead of the experiment. Mine was:

I didn’t have a payment flow setup, it would just ask for your email and then say “Thanks!” before you had a chance to pay — but it does show intent to pay, which is what I care about right now.

This time, the results were pretty dismal from both channels … the grand total was: 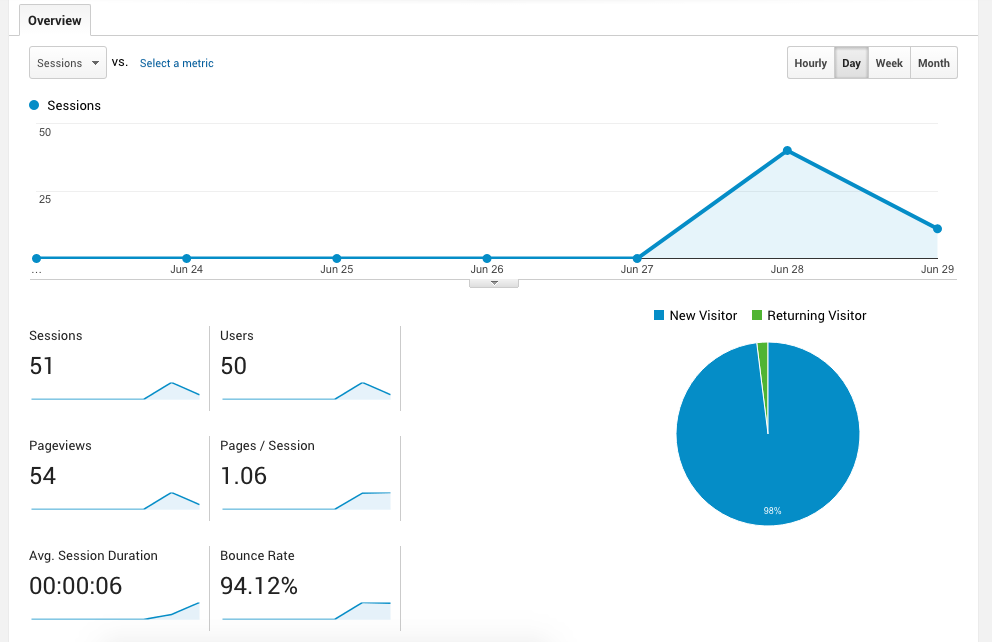 51 visitors; 0 conversions. Damn, that’s horrible. The Google Forms idea raked in 1,000 visits per channel (2k visitors total) so I was expecting something similar. However, it seems that was naive — many people thought that the Google Forms idea was an actual Google product, and hence the interest. This idea didn’t have that going for it, so no free ride.

Hmm. I need to figure out a way to get more traffic so that the results are at least statistically significant.

In a bid to get more visits, I made sure to submit it everywhere where my target audience might hang out. This included:

This won’t get me to 1,000 visits. Instead of spending money to get more visits (via ads), I decided to maximize the data I get per visit. I added CrazyEgg for both heatmaps (which they are well known for), as well as a new feature they’d launched called Recordings (which record everything the user does on your site). Here’s what that looks like: 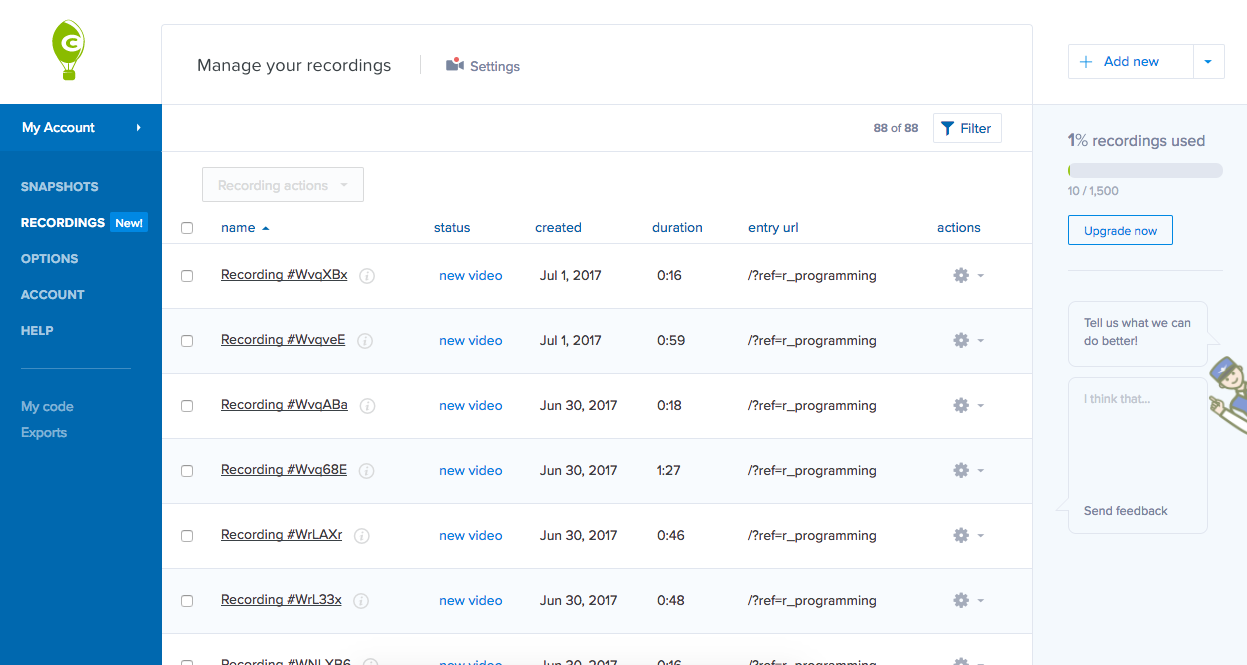 Excellent. I waited till the next day for the results to come in: 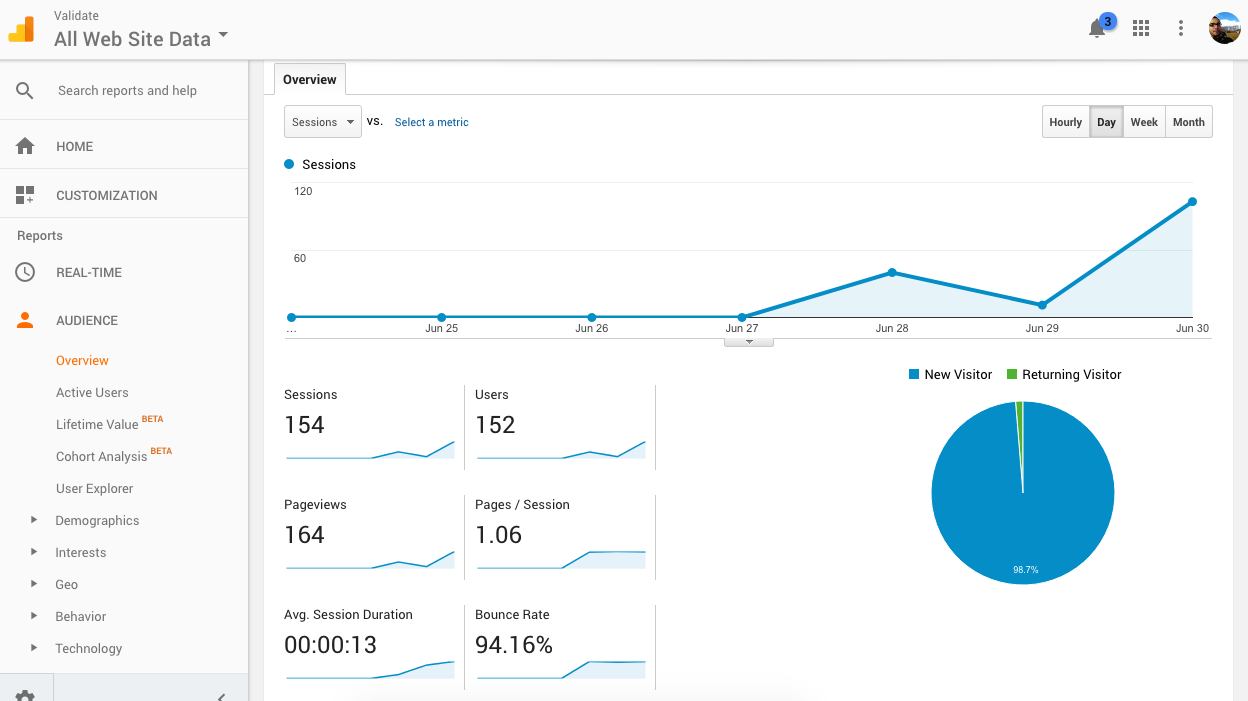 Ok, so that’s 100 more visits since yesterday. When digging through the CrazyEgg logs, I noticed something interesting:

Looks like 5% of visitors were interested in “Try Validate”, a button I’d added at the bottom of the page that simply scrolls up to the pricing section. Hmm, maybe a free trial would’ve converted better than … well, nothing.

I then checked the leads, and was surprised to see one lead:

Hmm, using a Gmail address for an enterprise plan does not seem promising — but hey, I sent an email out to Joe anyway to see why he signed up for a demo.

Update: By the next day, I had 300+ visitors total (most of it from Reddit/programming). No improvement in leads though — still just the 1. 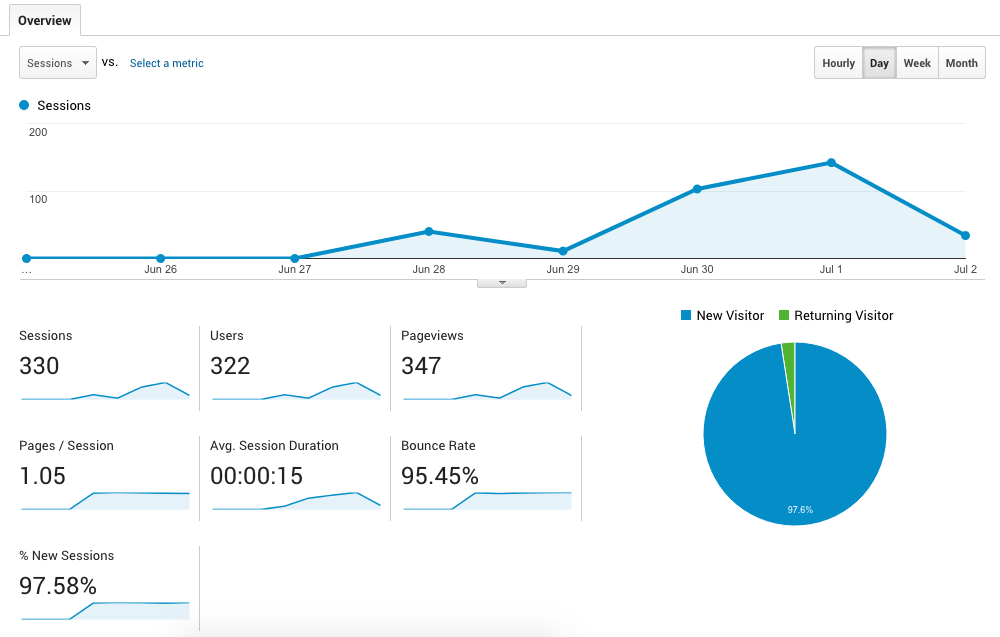 The numbers speak for themselves — this experiment failed.